Search in this web site

Smt. Sonia Gandhi, VU2SON presenting the RG award 1996 to Dr. S.Sathyapal, VU2FI, Managing Trustee and Director IIH.
On this occasion we recollect Two times Rajiv Gandhi National award received by IIH during 1995 and 1996 for best promotion of Amateur Radio in India and 1997 VU2IU received the award for establishing indigenous VHF repeater. Still it is active and net control VU3ITI on 145.200 plus shift between 6.30am - 7.15am. 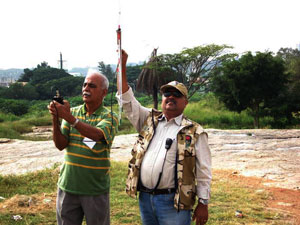 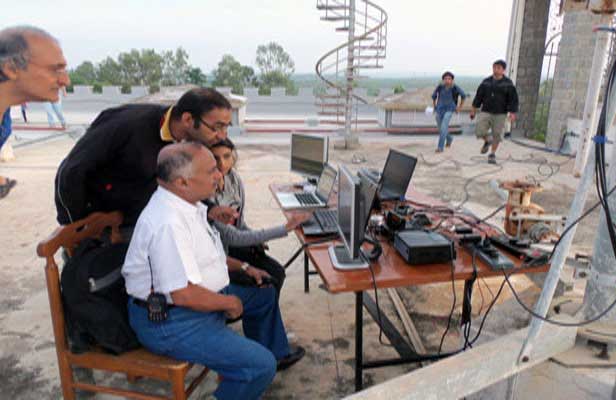 INDIAN INSTITUTE OF HAMS (IIH) was established as a registered trust in 1993 for promoting Amateur (HAM) Radio in India, has reached yet another milestone of completing 25 years of continuous service. IIH is founded by Dr. Sathyapal, VU2FI and Sri. R.J.Marcus VU2VTM ( regret for the omission by the webmaster)
IIH is actively associated with Department of Youth Empowerment and Sports, Government of Karnataka having established Ham Radio Station and training centre at Kanteerava Outdoor Stadium, Kasturba Road, Bengaluru -560 001, India.
Sri K Srinivas IAS, Commissioner for Youth Empowerment and Sports, Government of Karnataka is the new IIH Hon. Chairman under State Government notification. Indian Institute of Hams is affiliated to National Institute of Amateur Radio (NIAR), Hyderabad and Institutional Member, Amateur Radio Society of India (ARSI).

Since inception, IIH has made tremendous strides in awareness on amateur radio and increasing population of Hams by approximately 10000 hams in INDIA, with its members spread all over the world. From its early days, IIH was well recognized for its activities and received "RAJIV GANDHI AWARD" for two consecutive years in 1995 and 1996 for best promotion of ham radio activities in India, award was presented by Smt. Sonia Gandhi who is also a Ham with a call sign VU2SON.

Since 1993, IIH is continuously conducting Ham Radio Training programmes and make them appear for Ham Radio Examination conducted by Ministry of Communication, Government of India. At least 05 (Five) batches are conducted every year. Institute has created Ham awareness to thousands of people specially students and also in social organizations like Rotary and Lion Clubs. Thanks to the press and electronic media for supporting this activities by carrying the timely news for promotion of Ham Radio in the respective cities. Approximately, our members have received ten thousand ham licenses till now from Ministry of Communication, Government of India. We are sure, no other clubs / associations in India have reached such a large number. IIH has become one of the premier Ham institute in the India.
Our Ham training is four week ends (two days in a week) followed by live demonstrations on all modes, field training programmes, Radio direction finding and workshop on basic practical electronics etc. then Ham exam

Radcom 100 (Hundred years of Radio communication) in 1995 was conducted at Bal bhavan, Cubbon park, Bengaluru in association with Government of Karnataka attracted many youths and public in general. Similarly, many such conventions, field days, Radio Direction finding (Radio were conducted in benefiting manner.
In 1997, we installed homebrew VHF repeater and homebrew duplexer on 145.200 (+600 shift) in the Bengaluru City which was recognized by Rajiv Gandhi Foundation and got RAJIV GANDHI AWARD for the third time (National Award).
IIH published CALLBOOKS, a Directory for Amateur Radio Operators in India in the years 2000 and 2005. In association with NIAR, we have represented India in major international and national forums including many Hamfests. IIH has been recognized by many awards for its Ham movement in India

IIH has been instrumental in providing vital communication for natural disasters like Udyan Train accident (Yelahanka, Bengaluru), Orissa Super Cyclone, Gujarat Earthquake, Tsunami, Uttarkhand floods, Chennai floods etc. To have dedicated, service oriented volunteers to providing vital communication network during natural disasters and calamities, IIH has formed uniformed HAM ACTION FORCE (HAF) and are associated with Karnataka Civil Defence Organisation under Ministry of Home Affairs, Government of India and Government of Karnataka.
Institute is equipped to handle and provide communication network at any point of time to the nation. To strengthen the communication network under crises management, Director General of Police, Civil Defence, Government of Karnataka have recognized the activities of Indian Institute of Hams and have nominated one of the Director, Dr. Sathyapal, VU2FI as Officer Commanding (Communication), Directorate of Civil Defence, Government of Karnataka. This is strengthening our Ham movement to extend all communication support to our members. Series of in-house and field training exercises are conducted for our members. Several ham members are currently registered as civil defence wardens. We have equipped with HF, VHF base stations and VHF Handsets and related accessories to swing into actions. In fact, equipments we have in stores, we can adopt one district to provide effective communication.
For benefit of our Ham members, we have added one more VHF repeaters to the Silicon City of Bengaluru on 145.275 (-) Call sign VU2ZO installed on 17th floor, UB City in Central Bengaluru. This VU2ZO repeater is connected to echolink during net times. Ham Radio training imparted to ham aspirants under IIH by veteran Ham and ex-air force personnel   Sri R.J.Marcus, VU2VTM who has been serving this institute as one of the founder Director-IIH is meaning full and commendable.
IIH has conducted many technical workshops like Software Defined Radio etc under the leadership of Sri Ramprabhu, VU2DEV (Silent Key) Ex-BEL R&D personnel, who has a zeal and passion in teaching practical assembling of transceivers have benefited hundreds of upcoming engineers.